The Pont Canal du Cacor was constructed in 1845 to facilitate the transportation of merchandise to Bordeaux. This emblematic bridge is 356 meters long with 15 arches made of Toulouse brick and Quercy white stone (one of the there longest canal bridges in France). 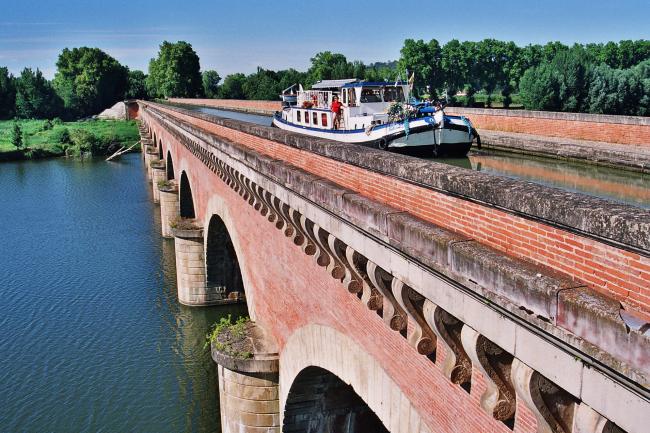 FROM THE SEA TO THE OCEAN

Linking the Mediterranean to the Atlantic to facilitate commerce in the south of France was an old project! The Canal Latéral à la Garonne was dug as an extension to the Canal du Midi which was created by Pierre-Paul Riquet in the 17th century. It was opened in 1845 and linked Toulouse to Moissac via Castelsarrasin. In the Terres des Confluences in included some works of art such as the Pont Canal de Cacor and the swing bridge of Saint Jacques.
Freight transport was never very prosperous due to the arrival of the railway, but tourism and the creation of the Canal Cycle Path (Vélo Voie Verte) along the old tow-path have given a new lease of life to the canal. It is now possible to have the Canal as an address and to live in a boat with one’s feet in the water all year long!